TB is short for Tuberculosis, an airborne, treatable disease caused by the bacteria Mycobacterium tuberculosis.

TB can be categorized as either a latent infection or active disease. A latent infection is a state of continual immune response to bacterial antigens where the individual, in most cases, does not feel ill and is not infectious. On the other hand, pulmonary TB, the most common form of active disease, is when bacteria multiply in the lungs anytime from the start of infection to years later. The activation of bacteria and their resulting proliferation manifests into a myriad of symptoms and the possibility of contagion. In regards to extra-pulmonary TB, when bacteria grow in other parts of the body like the lymph-nodes or bone, infecting others is not a worry. However, unfortunately, if not treated properly, all forms of TB can be fatal.

2. How is TB Transmitted?

TB is spread through the air. When an individual with active TB disease of the lungs or throat coughs, sneezes, speaks or sings, tiny particles originating from the infected sputum in the lungs can be inhaled by individuals in the vicinity. Inhalation allows for the bacteria particles to settle in others’ lungs, spreading the infection and the possibility for the bacteria to proliferate. As a result, TB cannot be contracted through mere physical contact like shaking hands of an infected individual or touching their clothes. However, bacteria can stay alive in the air for a few hours in closed spaces where fresh air circulation and sunlight are blocked, posing risk of infection for those entering tightly inhabited spaces of TB patients. Therefore, those who TB patients spend the most time with, including close friends and family, will most likely become infected. Yet luckily, if the sick person has left the room many hours ago and after effective ventilation, there is no risk in the environment. In general, short, casual travel in contact with TB patients do not carry great risk for transmission while longer duration and close contact with infected individuals, two rows behind and in front, may pose a serious threat for infection.

3. What are the Symptoms of TB?

The symptoms of TB proceed in a gradual progression. Initially, slight fatigue and blood in the expectorate will appear coupled with slight fevers and night sweats. Then, as more tuberculosis bacteria proliferate, weight loss, chest pain and loss of appetite will ensue. Specially, pulmonary TB disease may result in coughing up blood, mucus or phlegm as well as coughing for a duration exceeding three weeks and chest pain.

4. How is TB tested and diagnosed – Infection vs. Disease?

Two tests exist to test for determining the presence of a TB infection: the TB skin test (TST) and blood test detect the existence of TB bacteria in in the body. Testing occurs eight weeks after one’s last contact with an individual with pulmonary TB.  The skin test requires two visits to a healthcare provider. During the first visit, a small amount of fluid is injected into the lower part of the arm. Then, the patient must return within 48-72 hours for analysis of results. The TB blood test consists of blood being drawn and sent to the lab for testing. A positive skin and/or blood test indicates an INFECTION with TB bacteria. A TB infection does NOT indicate a latent TB infection or the progression to TB disease. An TB active disease diagnosis must then be made through the employment of chest x-rays and sample of sputum while also analyzing a patient’s medical history and physical examination. While not all individuals who are infected or have a latent TB infection will develop active TB disease, they are at higher risk for its development. Some experience disease directly after becoming infected before their immune system can fight the bacterial antigens while others develop the disease up to years later at a time when their immune system becomes weak. Most individuals experience inactive TB bacteria for the entirety of their lifetime.

5. Who should get tested for TB?

Individuals with high risk for infection should get tested for TB. These individuals include those who spend ample time with TB patients, recently traveled to TB common countries (Eastern Europe, Russia, Asia, Africa the Caribbean and Latin America), or worked in high-risk environments involving long-term care, homeless shelters and correctional facilities. Furthermore, adolescents, children, babies and the elderly have a greater probability for developing latent TB infections and should get tested as a preventative precaution. Moreover, those who experience an elevated risk of translating infection to disease should remain on top on being tested. Individuals currently sick with other infections such as HIV may experience weakening of their immune system which make them increasingly susceptible for the bacteria to become active. Moreover, illegal drug users, those infected in the past two years, and mistreated past TB patients should understand the importance of testing along with susceptible populations including babies, young children and the elderly. It is also worth noting that vaccinations, which were carried out on a regular basis in the past, provide only limited protection from TB and require susceptible populations to still be vigilant about testing and higher risks for infection.

6. What are the treatments for active TB disease?

After testing positive for a TB infection, patients are prescribed regiments of preventative medication to ward off the disease from developing. If diagnosed with TB disease, a medicine regiment will be prescribed once again comprised of antibiotics that kill the bacteria. The regiment is extremely vital to complete and follow correctly. Failure to effectively carry out treatment will result in live, adapted germs that will be challenging to treat due to developed resistance. Although a TB patient may feel better symptom wise after the first few weeks of treatment, bacteria can remain alive in the body for up to six months.  Thankfully, very few people experience serious side effects from TB drugs while minor ones include vomiting, nausea, loss of appetite, joint pain and skin rash.

7. What can TB Patients do to prevent the spread of TB?

As a TB Patient, there are several precautions you can take to reduce the probability of infecting others. First and foremost, following through completely on the medicine regimen for at least 6-8 months is vital in not only eliminating infection but also fully killing all the TB bacteria present in the body. Although patients may feel much better symptom wise only after a few weeks of treatment, TB bacteria maintains alive in the body for at least six months. Therefore, covering one’s mouth when coughing, sneezing, or laughing with an easily disposable tissue or into the upper arm/sleeve is necessary to prevent the spread of airborne bacteria. Especially during the first two or three weeks of treatment when contagion is at high risk, patients should keep distance and void close contact with others. Moreover, taking precautions for effective air circulation should eliminate the active bacteria in the air of bedrooms or frequently situated rooms of TB patients. Due to the airborne nature of TB, the first 2-3 weeks of treatment can be quite isolating for TB patients in hospitals who are often kept alone in a single room equipped with a TV, shower, toilet and telephone. Patients are not permitted to leave their room unless told and visitors as well as health professionals wear respirators to prevent inhalation. People affected by TB and grassroots organizations must be at the heart of all efforts to end TB. Stop TB works in the following areas: Supporting community engagement through the Challenge Facility for Civil Society (CFCS) grant program; ensuring TB programs are centered on human rights, gender-sensitive interventions and increasing access of key underserved and vulnerable populations to quality TB services; and investing in strengthening community systems and responses in global, regional and national platforms.

8. Where in the World is TB most present?

Countries with the highest burden of TB in the world with the highest estimated number of incident TB cases. Threshold: >10 000 estimated incident TB cases per year. {{Check your country profile on the interactive country dashboards.}} ---> 30 High TB Burden Countries {{Click here to see the interactive map}} TB is accompanying humanity since beginning of times. Since the invention of antibiotic treatment in the early 20th century, the TB space has seen scarce progress in enhancing prevention, treatment and care, leading to TB’s infamous number one position as world’s leading infectious disease killer, supplanting HIV and malaria. TB is raising higher global political health agendas, and especially in high-burden countries only in recent years and following formidable efforts of leading global health stakeholders and affected communities and resulting in a first ever UN High-Level Meeting on TB to be held in September 2018, seeking a global commitment to end TB at the highest political level. Stop TB Partnership is one of the leading organizations in preparations for this unique meeting.

The Stop TB Partnership is a hosted entity of the United Nations Office for Project Services (UNOPS), with its Secretariat based in Geneva, Switzerland. Established in 2000, the Partnership aligns 1,600 partner organizations (including international and technical organizations, government programs, research and funding agencies, foundations, NGOs, civil society and community groups, and the private sector) all over the world, leading global advocacy to end tuberculosis. 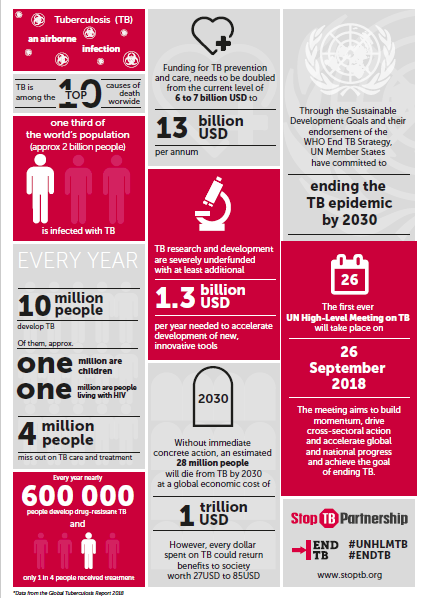