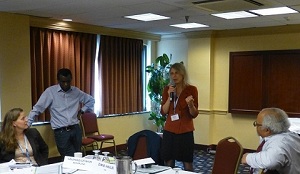 The World Health Organization convened the 19th Core Group meeting of the Global TB/HIV Working Group from 11th - 12th February 2014 in Washington DC. The meeting was co-chaired by Diane Havlir, the outgoing Chair of the Global TB/HIV Working Group and Ambassador Eric Goosby the new incoming Chair. Meeting participants critically reviewed the past ten years of global progress in implementation and science in preventing, diagnosing and treating HIV-associated TB. They also identified essential next steps including enablers for advancing the TB/HIV response particularly at country level to eliminate TB deaths among people living with HIV. Innovative ideas to address unmet research needs in prevention, diagnosis and treatment of TB among people living with HIV were also shared for shaping the global research agenda. The detailed agenda and presentations can be found at the links below and a more detailed report will be posted up in due course.

The World Health Organization, supported by the President's Emergency Plan for AIDS Relief (PEPFAR), convened a regional TB/HIV Implementation Workshop followed by the 18th Core Group meeting of the TB/HIV Working Group of the Stop TB Partnership from 10th – 12th April 2013 in Maputo, Mozambique. The event brought together more than 120 participants, comprising key international partners as well as regional and national HIV and TB stakeholders including community and civil society representatives from 14 countries in the African region. Countries represented included Botswana, Ethiopia, Kenya, Lesotho, Malawi, Mozambique, Namibia, Nigeria, South Africa, Swaziland, Uganda, United Republic of Tanzania, Zambia, and Zimbabwe. The aim of the workshop was to review progress in implementation and promote strategies to increase access to early ART for people living with HIV and active TB and to accelerate the scale-up of the Three Is for HIV/TB in the African Region. Participants also shared best practices and identified priority actions for scaling up, and monitoring and evaluating the implementation of collaborative TB/HIV activities.

The aim of the 18th Core Group Meeting, which was also attended by participants of the regional meeting and members of the Core Group was to assess the latest evidence, identify challenges and opportunities to eliminate TB deaths among people living with HIV. The meeting also discussed strategies to define the direction of the TB/HIV Working Group over the coming years. For more details please visit the links below. Reports of both meetings will be posted below in due course.

The 16th meeting of the Core Group of the TB/HIV Working Group of the Stop TB Partnership was held in Almaty, Kazakhstan from 26 - 28 May 2010, and hosted by the KNCV Kazakhstan. The meeting reviewed global and regional progress made on the implementation of collaborative TB/HIV activities, progress on implementation of infection control measures, the inter-linkage of drug resistant TB and HIV, prisons and drug use with an emphasis on the Central Asian context. The meeting, which was held in Russian and English, with simultaneous translation, was attended by TB and HIV programme managers or their representatives from four countries of the region (Kazakhstan, Kyrgyzstan, Tajikistan and Uzbekistan), as well as senior national representatives of intergovernmental agencies, communities living with the joint epidemics and major funding organisations.