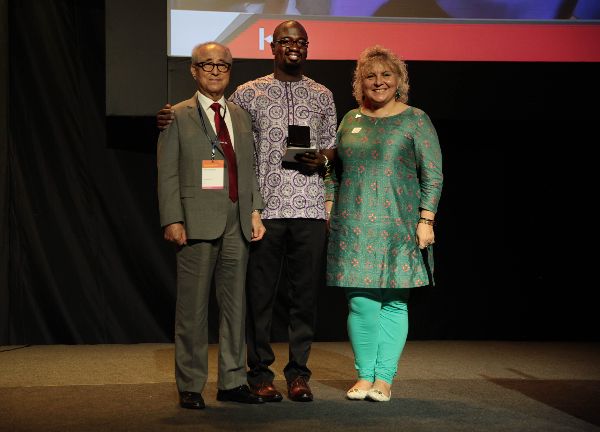 30 October 2019 │Hyderabad, India - The Kochon Prize 2019, ‘It’s Time for Human Rights and TB’, was presented by Dr. Lucica Ditiu, Executive Director of the Stop TB Partnership to Kenya Legal AIDS and HIV Services (KELIN) during the Opening Ceremony of the 50th Union World Conference on Lung Health in Hyderabad, India, inaugurated by the Honorable Vice-President of the Republic of India, Shri M. Venkaiah Naidu.

KELIN is a Kenyan non-governmental organization that focuses on creating country-based networks that intersect law, ethics, litigation, human rights, TB, and HIV.  Their goal is to advocate for a holistic and rights-based system of service delivery in health and for the full enjoyment of the right to health by all, including those who are vulnerable, marginalized, and excluded. After a thorough evaluation of all nominations, the organization was selected by an independent Kochon Prize Selection Committee for its leadership and ongoing struggle for justice and non-discrimination in the TB response.

“KELIN started and continues the essential work on promoting and protecting human rights in TB. In a space where few organizations are calling for human rights to be an integral part of TB programming, KELIN fights for the rights of people to access TB prevention, diagnosis, treatment, care, and support. The Stop TB Partnership is proud of our collaboration with KELIN to promote a TB response that is equitable, rights-based and people-centered,” said Dr. Lucica Ditiu, the Executive Director of the Stop TB Partnership.

The Kochon Prize, consisting of a USD 65,000 award, has been given annually for the past 13 years to individuals and/or organizations that have made a highly significant contribution to ending TB, a disease that is curable but still causes the deaths of more than 4,000 people every day.

The Union World Conference on Lung Health is the world’s largest gathering of clinicians, public health workers, policymakers, researchers and advocates working to end the suffering caused by lung diseases worldwide. The Honorable Vice-President M. Venkaiah Naidu resoundingly supported the global fight against TB by recommitting his country to eliminate the disease by 2025 through a multi-sectoral and community-driven approach.

“An effective TB response must not only align to but indeed be born of human rights,” said Allan Maleche, Executive Director of KELIN. “What KELIN has started in collaboration with the Stop TB Partnership and the global and regional, national and grassroots community networks is important, and the continued support from the Stop TB Partnership is critical to reaching our goal of transforming the TB response and ending TB."