28 September 2021, Geneva, Switzerland – The Stop TB Partnership today released new data showing how the COVID-19 pandemic and dismally low levels of funding represent the main barriers to achieving the United Nations Sustainable Development Goals of ending TB by 2030. The data from 2021 shows that the impact of COVID-19 on the TB response has continued to be profound: 1.2 million fewer people have been diagnosed and treated for TB in in 2021 with four months still left in the calendar year. Currently, only US$6.5 billion per annum is available for the TB response globally, less than half of the commitments made at the United Nations High-Level Meeting (UNHLM) on TB. 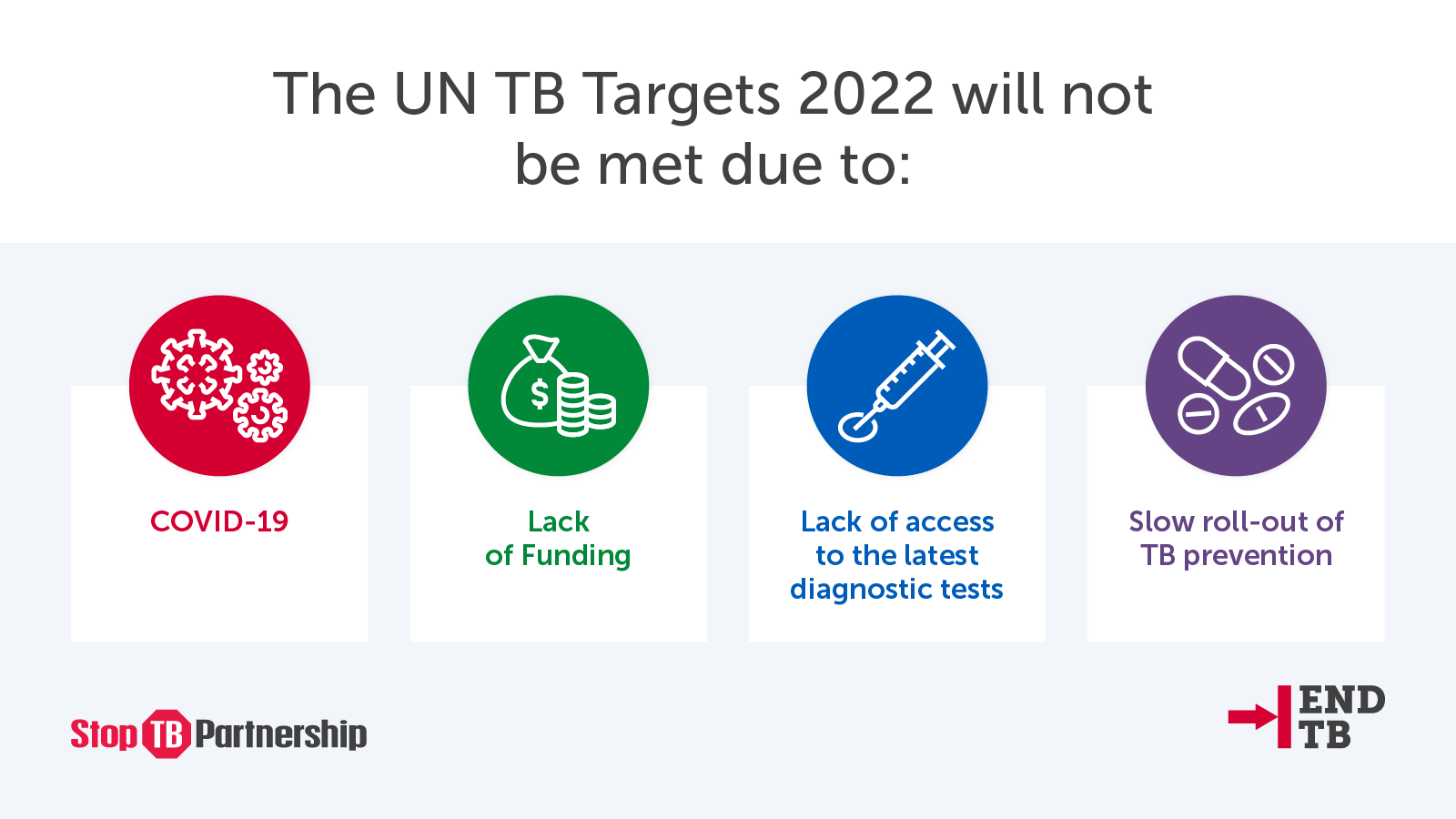 The organization warned that getting the TB response back on track will require at least a doubling of resources currently being provided to the fight against the disease, including a significant increase in the share of its resources the Global Fund to Fight AIDS, Tuberculosis, and Malaria (The Global Fund) allocates to TB.

“Years of chronic neglect have led to an unbearable situation in which TB kills more than 4,000 people a day— more than HIV and malaria combined—and still, too few decision makers, donors and stakeholders care about TB,” said Dr. Lucica Ditiu, Executive Director of the Stop TB Partnership. “It is not that we will see future consequences: we are in the middle of the disaster, and our attention seems to be in the very wrong place. Data from 2020 and 2021 will reveal soon how hundreds of thousands of additional people are dying from TB and how TB drug resistance and the TB epidemic itself are on the rise.”

An estimated 5.7 million people received treatment for TB in 2020, a drop of 21% from the previous year—leaving an estimated 4.3 million people with untreated TB and spelling all but certain death for probably half that number.

“We always knew that ending TB by 2030 was going to be an uphill battle, but COVID-19 and the reduced funding for TB have sent us rolling further down the hill than anyone could have expected,” added Ditiu.

Based on available TB notification data, the Stop TB Partnership anticipates that the world will fail to achieve the 2018 United National High-Level Meeting (UNHLM) on TB target of diagnosing and treating 40 million people with TB in the period 2018-2022. Global projections, based on data from 27 countries representing around 73% of the global burden of TB, show that less than 85% of this UNHLM target will be achieved.

“While 85% might sound like an achievement, what it means in practice is that more than 5 million people with TB will be left behind without treatment,” said Dr. Ditiu. “Untreated TB translates into approximately a 50% mortality rate, and those who survive will not only suffer the consequences of the disease but will also spread TB to many more, perpetuating the cycle of transmission.”

“The impact of the COVID-19 pandemic has been severe, reversing hard-won gains in the fight against TB. However, this is not a moment to lose hope but to redouble commitments and action for the sake of the millions who face immense suffering and lose their lives to this preventable and curable disease. The UN Secretary General with WHO has outlined priority recommendations to ramp up the TB response. Efforts need to be intensified to make these recommendations a reality," said Dr. Tereza Kasaeva, Director of WHO’s Global TB Programme.

TB is curable, and TB interventions are some of the most cost-effective of all public health interventions—every $1 invested in TB prevention and care yields a return of $43. “No matter which way you slice it, spending more on TB is one of the world’s best social investments,” said Bjørn Lomborg, the President of the Copenhagen Consensus Center.

The biggest external donor to TB programs—the Global Fund—only allocates 18% of its resources to TB, even though the disease causes more than half of the deaths from diseases served by the Global Fund. In 2019, 1.4 million people died from TB, more than HIV/AIDS (700,000 deaths) and malaria (410,000 deaths) combined.

Of the currently available funds for the fight against TB, 85% comes from domestic budgets. The remaining 15% is provided only for two-thirds by The Global Fund. Low-and middle-income countries (LMICs) remain heavily dependent on the Global Fund for TB services, clearly putting the Global Fund under the spotlight to significantly increase its funding portion to close the huge gap.

“If we want to end the TB epidemic, people affected by TB must be at the center of the response,” said Austin Obiefuna, Executive Director of Afro Global Alliance and incoming Vice-Chair of the Stop TB Partnership Board. “Countries must step up their efforts to conduct assessments and develop action plans to transform their TB response into one that is equitable, rights-based, gender-transformative and people-centered.”

“Despite being one of the leading infectious disease killers in the world, TB remains an orphan disease, never a political priority and never high up on funding agendas. To avoid further setbacks to the TB response, recover from losses experienced over the past year, and ensure that the Global Fund’s allocations are in line with TB’s share of disease burden and deaths, the Global Fund’s financial contribution for TB must be at least doubled,” Obiefuna added.

The worrying state of the response to TB will also be discussed at the Stop TB Partnership’s 34th virtual Board Meeting, held from 28-30 September 2021 under the leadership of the Board Chair, India’s Minister of Health and Family Welfare, Mr. Mansukh Mandaviya. Progress towards achieving global targets to end TB was also discussed at an event on the side lines of this year’s United National General Assembly hosted by the Russian Federation and the WHO.