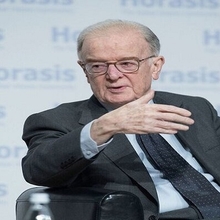 10 September 2021 - The Stop TB Partnership is deeply saddened by the news of the passing today of the former president of Portugal, Jorge Sampaio, who has died at the age of 81.

President Sampaio had been in delicate health for several years and had been in hospital in Lisbon for the past two weeks. He had served as Portugal's president for two terms between 1996 and 2006 and had previously been mayor of the Portuguese capital, Lisbon.

President Sampaio also served as UN Special Envoy to Stop Tuberculosis (2006-2013). He was appointed to this role in May 2006 by Kofi Annan, the UN Secretary-General at the time, to help raise the issue of tuberculosis (TB) on the international political and development agendas. As Special Envoy, he worked closely with the Stop TB Partnership Secretariat and the World Health Organization’s Global TB Programme.

"Let’s pursue a common purpose: achieving a tuberculosis-free world. We can make this dream a reality by working all together - and by that, I mean governments, donors, the private sector, civil society, and grassroots organizations - to overcome the huge challenges we face and stop this disease that kills nearly 2 million people every year." - Jorge Sampaio.

He was deeply committed to ending TB and was an inspiration to all who worked alongside him. Today, the Stop TB family has lost a great leader and a dear friend.