28 October, Denpasar, Bali – For the first time ever, a Call to Action on Financing for Tuberculosis Response was developed by the Indonesian G20 Presidency, which recently concluded its 2nd Health Ministers and Health Deputies Meeting on October 26-28th 2022. The outcome of the meeting was the Health Ministers Chair’s Summary which highlights the deliverables from three Health Working Group meetings held throughout the Indonesian Presidency of the G20.

Click to Read the Full text of Health Minister Chair's Summary and Call to Action on Financing for Tuberculosis Response: https://bit.ly/3EofqIL 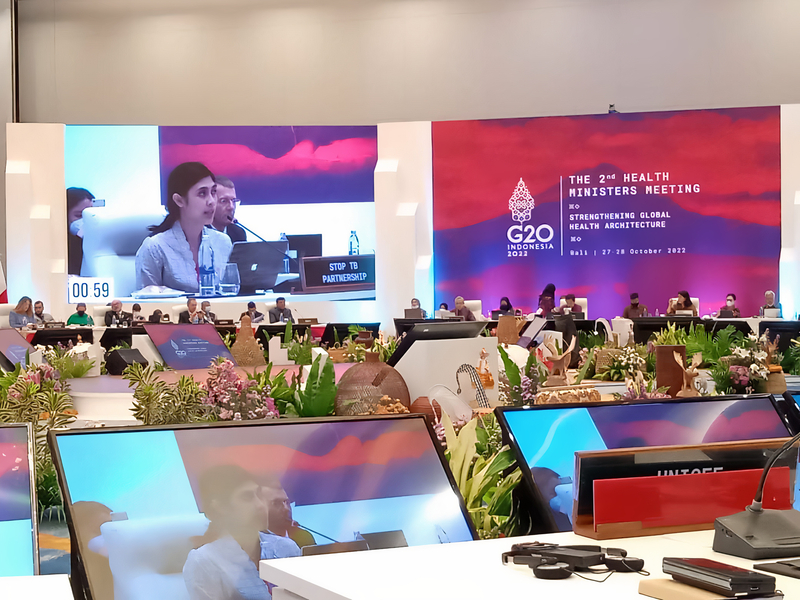 The Call To Action was the result of the first working group, which held a side event on “Financing for TB Response: Overcoming COVID-19 Disruption and Building Future Pandemic Preparedness” on 29-30 March 2022. The document calls on G20 member countries to increase funding for tuberculosis (TB) in order to prevent millions from dying or becoming ill. The Stop TB Partnership, who collaborated in the drafting of the document, congratulated Indonesia on its leadership on TB during its G20 Presidency.

The COVID-19 pandemic has significantly impacted the TB response and disrupted access to TB services. In 2021, deaths from TB--a curable and preventable disease--increased for the second year in a row, with 1.6 million people dying from the disease. That same year, an estimated 10.6 million people fell ill from TB, a 4.5% increase from 2020, and many people with TB were not diagnosed and treated: the reported number of people newly diagnosed with TB fell from 7.1 million in 2019 to 6.4 million in 2021.

“We applaud the support for TB which Indonesia has demonstrated, and cultivated, throughout its G20 Presidency,” said Dr Lucica Ditiu, Executive Director of the Stop TB Partnership. “Building upon this important momentum, I hope G20 member countries will continue this great vision during India’s upcoming Presidency and provide leadership for the 2023 United Nations General Assembly High-Level Meeting on Tuberculosis. G20 countries can, and should, lead the way in raising additional resources towards closing TB investment gaps.”

“Fifty percent of new infections and deaths due to TB occur in the G20 countries,” added Dr Ditiu. “Yet, those countries possess sufficient financial capacity to tackle this epidemic—all we need now is the political will to do so. The Call to Action is a great step in the right direction, but it needs to be followed up by strong political commitments.”

In 2020, global spending on TB services decreased for the first time since 2016, potentially derailing fragile gains made to date. Currently, financial resources available to fight TB are less than 40% of what is needed.

The recently released Global Plan to End TB, 2023-2030, provides detailed costing estimates and anticipates the priority actions that will be necessary in the wake of the COVID-19 pandemic to get back on track and meet the global goal to end TB by 2030. The Global Plan projects that between 2023 and 2030, US$ 249.98 billion will be needed to end the TB epidemic.

In May 2022, during the 35th Stop TB Partnership Board Meeting, Board Chair and Minister of Health of India, H.E Mansukh Mandaviya congratulated Honorable Minister of Health of Indonesia, Mr Budi Gunadi Sadikin for being a champion in prioritizing TB under the Indonesia Presidency of G20. He also informed that India, under its 2023 Presidency of the G20, will focus on two health issues – TB and cervical cancer.

The Call to Action on Financing for TB Response was drafted by the Indonesian G20 Presidency in consultation with G20 members and in collaboration with the World Health Organization (WHO), the Stop TB Partnership, the Global TB Caucus, the Global Fund to fight AIDS, Tuberculosis and Malaria, USAID, the World Bank, and Stop TB Partnership Indonesia. Without prejudice to members’ views, it does not purport to suggest agreement among G20 members on these issues.