Stop TB Partnership and TAG call for increased Research and Development funding for disease that kills more than 4,100 people per day

A new report finds that global funding for tuberculosis (TB) research totaled US$915 million in 2020 - less than half the goal of US$2 billion set forth by participating country governments at the 2018 United Nations High-Level Meeting on TB. The findings released today by Treatment Action Group (TAG) and the Stop TB Partnership come at a time when worldwide TB deaths rose for the first time in a decade.

The report – Tuberculosis Research Funding Trends, 2005–2020 – presents new data on 2020 funding for TB research and development (R&D) and analyzes trends in investment since 2005. While TB was surpassed by COVID-19 as the world’s deadliest infectious disease last year, the disease still kills around 1.5 million people annually. Despite the toll it takes around the world, TB funding has been flat since 2018, and in 2020 TB received less than 1% of the amount invested in COVID-19 R&D.

Yet, the global response to the novel coronavirus – with unprecedented resources marshaled by public and private sectors to develop vaccines and therapeutics to curb the pandemic – serves as an example of what astonishing achievements are possible with enough political will.

“The mobilization of over US$100 billion for COVID-19 research and development in the first 11 months of the pandemic shows us just how powerful a coordinated effort against a disease can be,” noted Dr. Lucica Ditiu, Executive Director of the Stop TB Partnership. “We can and must harness this impressive commitment to global health toward the fight to end TB.”

The report reveals that, in 2020, public sector funding accounted for 70% of overall R&D funds, at US$641 million. Philanthropies were the second-largest funding source, contributing 15% (US$134 million), while private companies and multilateral organizations represented 10% and 5% of the pie, respectively, or US$89 and US$49 million. Of the total R&D amount, 36% was spent on drug development, 18% on basic science research, 14% on diagnostics, 13% on epidemiology, 13% on vaccines, and 6% on infrastructure and other needs.

As the COVID-19 pandemic has shown, effective vaccines can be the key tool to save lives. Yet, TB vaccine research has been slowed by chronic underfunding – still US$2.7 billion behind the UN goal for 2018-2022. There is only one moderately effective century-old TB vaccine, compared to over 20 far more effective ones for COVID-19.

“What’s enabled the development of dozens of COVID-19 vaccines in less than a year has essentially been money,” noted Austin Aurinze Obiefuna, Executive Director of the Afro Global Health Alliance and incoming Vice-Chair of the Stop TB Partnership Board. “I think that the same enormous amount of funding should be applied with equal vigor to the development of TB vaccines. But that simply doesn’t seem to be happening.”

While public sector agencies made up ten of the 15 top individual entities for TB funding, the number of countries meeting their fair share targets to allocate 0.1% of their government’s overall R&D funding to TB has declined since 2017. Only one country, the United Kingdom, reached that target in 2020, compared to three countries in 2019. Meanwhile, the number of governments meeting over half of that, at 0.05%, has also fallen. The United States for its part spent US$401 million in 2020, and the National Institutes of Health (NIH) was the single largest investor. Private sector research has continued to lag from previous years, falling by nearly 40% to US$89 million, from a high of US$145 million in 2011.

Making much-needed progress against TB demands investments commensurate with the threat posed by the disease around the world – including a commitment to rectify the inadequate funding of the past. To close the TB R&D funding gap, an additional US$10 billion is needed over the next two years.

“Wealthy countries need to step up and put more money into correcting global health inequalities, which COVID-19 vaccine allocation inequities laid bare,” urged Mark Harrington, Executive Director of TAG. “COVID-19 made more people around the world aware of the importance of R&D spending than ever before. Now is the time to finally start making investments ambitious enough to end TB for good.”

“Tuberculosis is one of the oldest diseases known to mankind, and yet it is the second-largest communicable disease from a known agent in terms of number of deaths globally. There is a critical need for more investment in R&D of new technologies to be equitable available to all. Brazil has strengthened its commitment to increase funding in R&D, having launched several projects in partnership with the Ministry of Science and Technology. But it is still not enough. The world's leading public and private sectors need to mobilize more resources in favor of TB R&D, so that together we can end TB as a global health problem."

“I congratulated the Stop TB Partnership and TAG for the new report on research funding for TB. I am pleased to note that India leads TB research funding among high-TB-burden countries. With learnings from the COVID-19 pandemic, the Indian Council of Medical Research is now prepared to step up faster research and contribute new science for ending TB in India and around the world.” 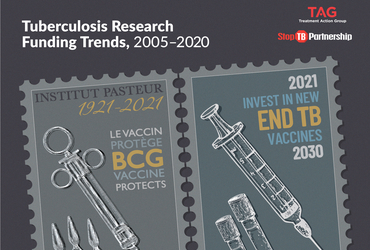 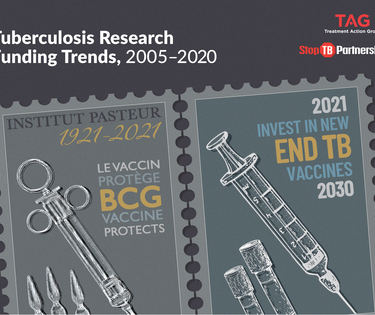