20 June 2021. For over three years, following civil unrest, thousands of refugees from Cameroon have been seeking refuge in the Southern Taraba State of Nigeria. It is estimated that over 8,000 people moved to Taraba State between January and March 2020. Like for other migrant populations, inaccessible TB services, poor nutrition, unsuitable housing characterized by overcrowding and poor ventilation, and a lack of knowledge and awareness on TB, are among the barriers and human rights violations that increase vulnerability and fuel TB transmission among this vulnerable population.

Milka (not her real name), a 27-year-old mother is one of the of the many refugees. She lost her husband in the crises and now lives with an uncle in a host community. The nearest health facility is located 6 hours away by motorcycle. Having coughed for over 4 months, Milka faced stigma within her community who believe chronic cough has no cure. She shares a hut with two other women who have two children under the age of five; neither of whom have been immunized and one child has been coughing for some time.

With funding from the Stop TB Partnership Challenge Facility for Civil Society (Round 9), Janna Health Foundation (JHF) launched a TB project in refugee host communities in three Local Government Areas (Sardauna, Gashaka and Kurmi) and one Development Area (Ngada) in Taraba State, Nigeria, that puts the rights of and refugees at the heart of the response.

The Challenge Facility for Civil Society is a grants mechanism within the Stop TB Partnership that gets funding to the grassroots to promote a rights-based, gender transformative TB response that is driven by affected communities.

Key intervention areas include: engaging and empowering refugees to know and claim their rights, designing, implementing and monitoring TB services in collaboration with the refugee populations, and the provision of TB services, including systematic screening of TB among the refugee communities and linkages to treatment care and support. Community case finding and accessible TB care services, free of cost, are now provided by trained refugees, who work in close collaboration with local health facilities and staff. Through sustained community outreach, engagement and health education, misbeliefs and misconceptions about TB have been erased, people understood their rights to information, participation and health and people started to access TB services for the first time. 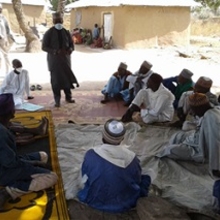 Between 1 August and 30 November 2020, 35 people from the refugee communities informed and were trained to reach out and provide culturally appropriate services in their communities. Subsequently 2,730 people were verbally screened for TB (1,349 (49%) were females). Among the 2730 people screened 1,182 (43%) were found to be presumptive of TB. They were subsequently tested; 594 (50% were females while 109 (9.2%) were children). One hundred and twenty-one (all forms) TB cases (including 3 TB/HIV co-infected cases) were notified; 62 (51% were female). Trained community members subsequently designed and implemented community-based TB care and support services to support people through treatment.

Lessons Learnt: Using a rights-based approach, one in which refugee communities and community leaders meaningfully engaged in the design, planning implementation and monitoring of activities was key to the uptake of TB services, linkages to care and ownership of the project. Using an approach that is rights-based, equitable and stigma free with communities at the center is called for by communities in the Deadly Divide and we can affirm to its importance to reaching those who are key and vulnerable.

Challenges: The absence of guidance on TB screening for refugee populations was a challenge, however it allowed project staff to engage and design a project that was also in accordance with the perspectives from people in the refugee population. 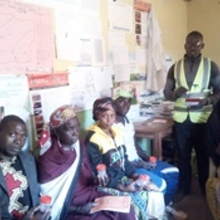 Milka had this to say when she met supervisors from JHF, “I thank you for giving us hope, our leaders now see this disease in a different way. I feel more confident to sit among my peers while my little girl can also feel free with other girls her age”.

These experiences confirm the impact of proper engagement of key and vulnerable populations like the Refugee Communities in finding people with TB in High Burden Countries like Nigeria.