In this tiny grave lies buried hopes, buried ambitions, buried dreams. In here lies the lifeless body of Joyce Wangechi. If she lived longer, she would have narrated her struggles and battles with Multi drug Resistant TB (MDR-TB). But those who are left will tell her story. A story that should change the world. A story that should make everyone who cares about TB agitated to act.

Twelve-year-old Wangechi had battled with MDR-TB since August 2017. Before then Joyce who had dropped out of school due to ill health, had been misdiagnosed and treated for all myriads of illnesses including pneumonia, malaria and common cold. It took about three months for health workers to diagnose MDRTB. She first underwent through normal TB treatment for six months before the doctors realized she had drug resistant TB. Joyce was admitted in an Global Fund supported isolation ward at Kenyatta National Hospital in Nairobi which was to become her home for the next 8 months.

Detained for failure to raise the hospital fees

Young Joyce was discharged in November 2017 but could not leave the hospital before her parents paid the whooping accumulated hospital bill of USD 12,000! She was detained in the hospital for three months that followed until TB advocates intervened to have her released. The hospital released her but not before the father, a casual construction worker signed a commitment with the hospital that he would paying USD 15 per month until he cleared the USD 12,000. This will take the poor father 66 years to clear the bill!

Collapsed lung and the oxygen concentrator 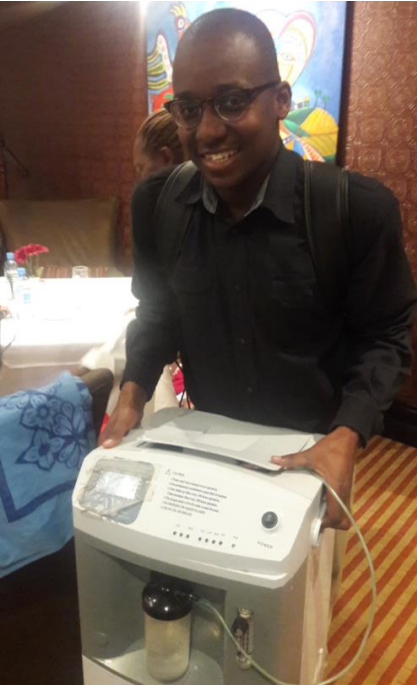 By the time she was discharged from hospital, Joyce’s lungs were so damaged that her breathing was dependent on an oxygen concentrator that cost the family USD 1100. The money was raised through a fundraiser from friends and family. The bulky machine is powered by electricity which meant young and playful Joyce could not join her friends who she had missed so much during the time she was admitted in hospital.

Joyce ‘s family lives in a semi-slum area with unstable power supply. Recent heavy rains experienced in the country worsened the power situation. This forced the family to invest in a backup generator at the cost of USD 65 in case power failed. The family had to fuel the generator to a tune of USD 10 per night.

And we lost Joyce

On the fateful Sunday night of 15th April that Joyce breathed her last, there were frequent and prolonged power outages. The family connected the Oxygen machine to the generator which failed to work despite several frantic attempts to revive it. The machine failed Joyce. She was rushed to Kenya National Hospital to try and revive her failed breathing. She died on the way to hospital. We lost Joyce.

Message of condolences from TB advocates

Dear Joyce, as you rest in peace, we hope you will find grace to forgive us. Forgive us for failing you. For failing to deliver on the commitment to reduce to zero TB related catastrophic costs. We failed to stop another TB related death. We failed to get you a mobile Oxygen concentrator, we failed to facilitate you play with your peers, go to school and achieve your dreams. As you lie in peace, you still owe Kenyatta National Hospital USD 12, 000. Never mind Global fund supported all the expenses related to your illness, but you still owe them even in death. The bills follow you to your grave. Fare thee well, Joyce Wangechi.